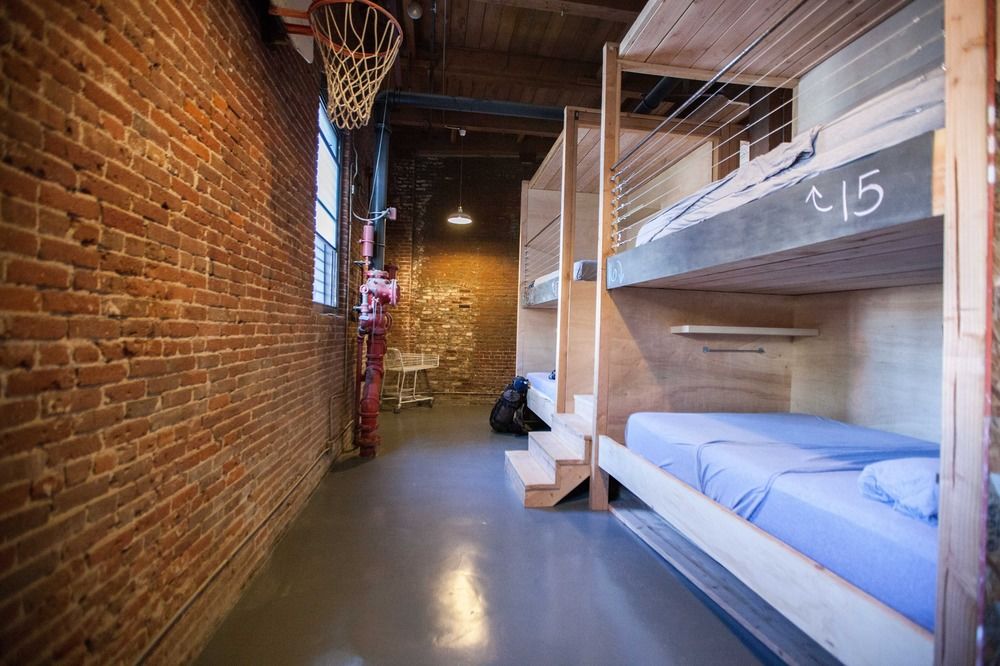 Podshare: The Next Great LA Startup 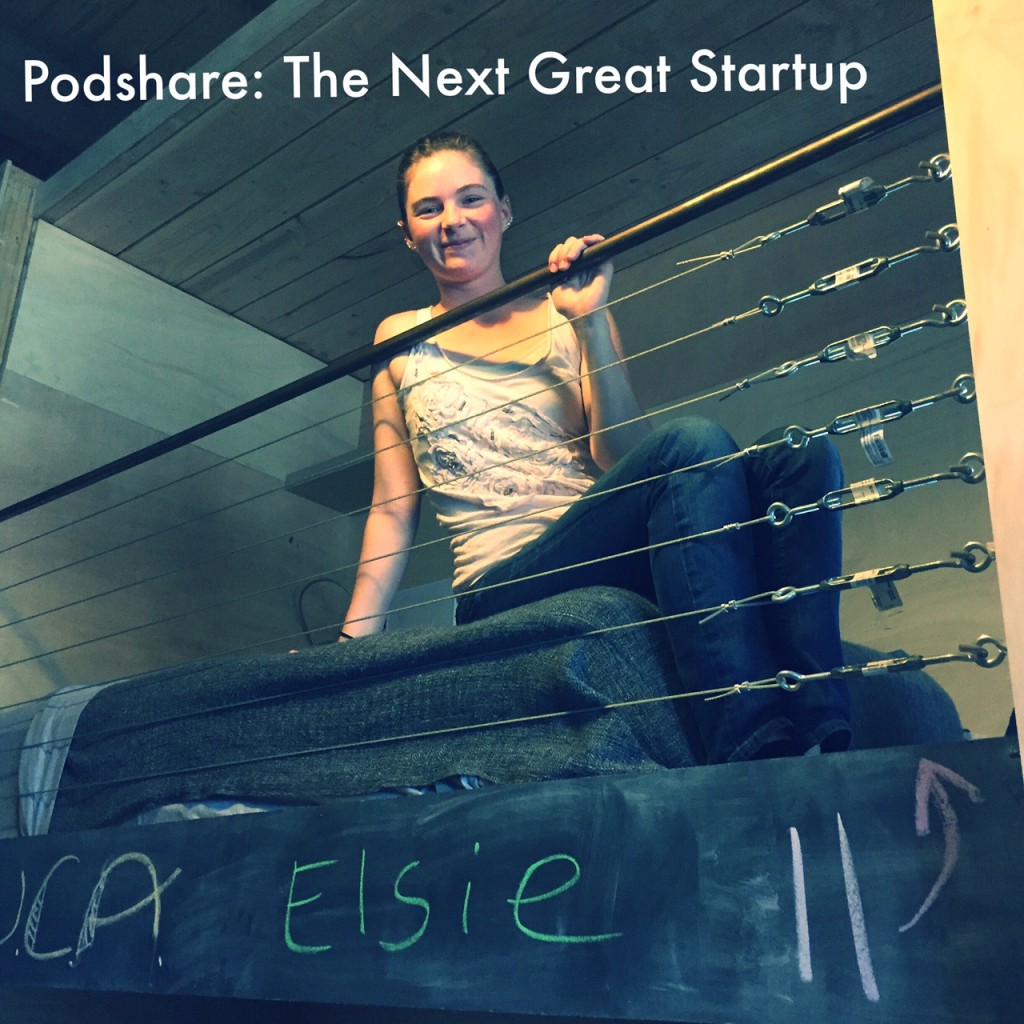 So I decided to put my cohousing money where my mouth is this week by staying at a shared living space. If you haven’t read Group Living for the Win go ahead and read that first. PODSHARE is an LA hostel-like millennial magnet where people go to stay one or two nights and meet some like-minded people. They have two locations now, I stayed at the newest one in the downtown arts district.

When I pull up to PODSHARE I see nothing but a brick wall. In fact, there are no real restaurants or shopping around. All I see are blocks and blocks of old industrial buildings painted with the most colorful, interesting murals you’ve ever seen. 5 minutes away is bustling downtown and you can see the high-rise buildings that scratch the skyline. The arts district itself feels like a ghost town, yet cars are parked solid on every un-metered section of street. Where are all the people?

I type in the building code they gave me and walk back to what looks like an office suite. The entry-way contains a wash room and a living room with a big couch and huge tv that’s permanently set to play Wii. As I walk further in I see the bunk bed area which is two stories of wood-framing with railings and stairs to reach the top bunks. In the fashion of the arts district the floors are all concrete and there’s lots of brick juxtaposed against unstained wood furniture. There are chalkboards everywhere covered with people’s names and quotes and random observations. I’m greeted by a girl in her 20s who takes my money and gives me a little tour. “Unless you see an item tagged with a pod number everything is shared.” 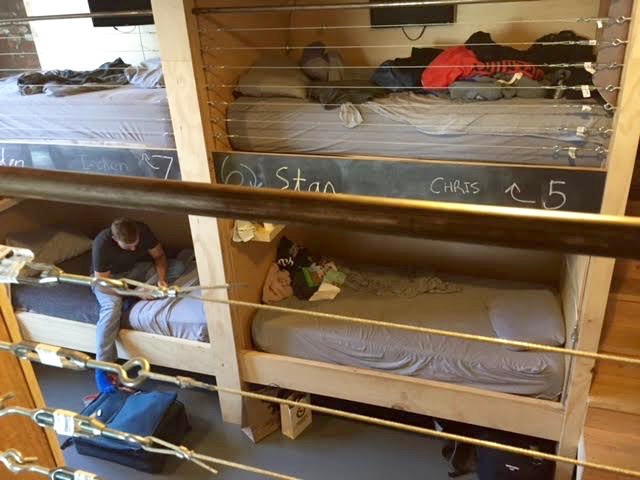 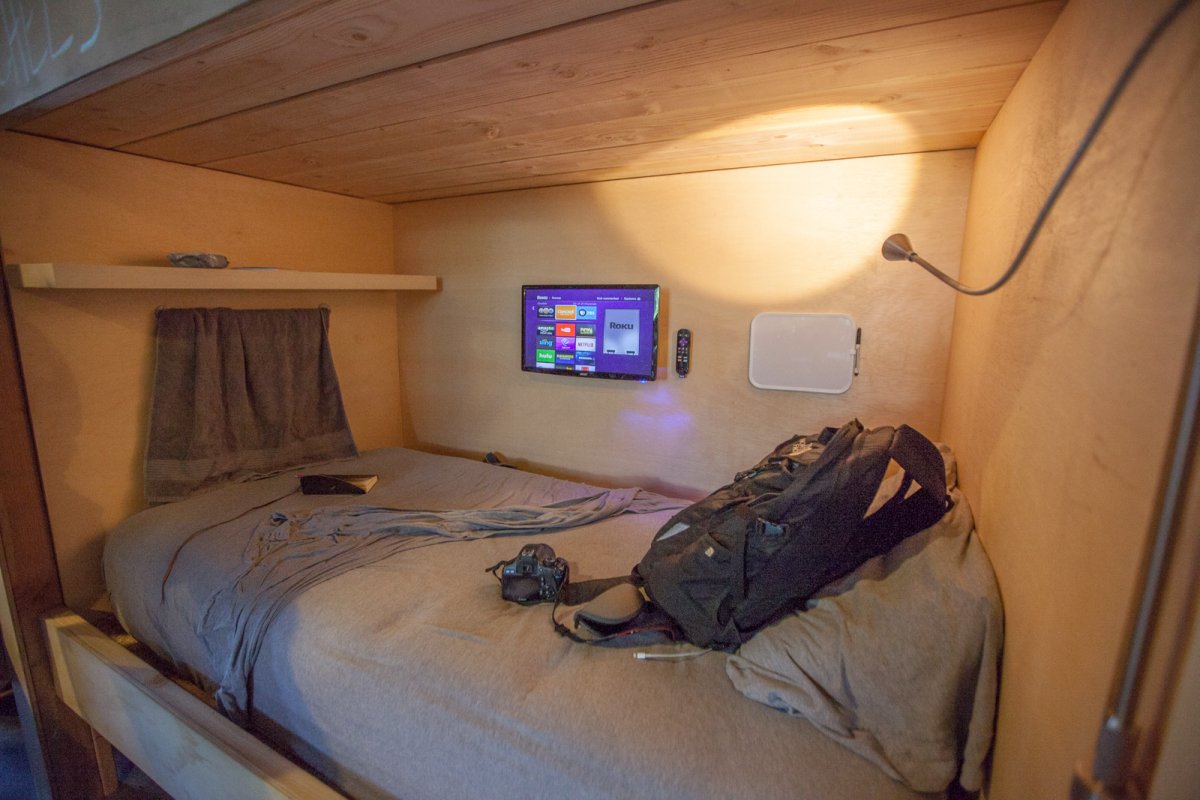 That’s right, we have a shelf of food anyone can have. People come through every few days and leave some items behind. Shampoo, soap, clean towels, plates and utensils all shared. We have a fridge and a full kitchen so if I wanted to go get a bunch of ingredients and make myself a home-cooked meal I could. If I don’t plan on sharing it I’d just put it in my pod slot in the fridge. 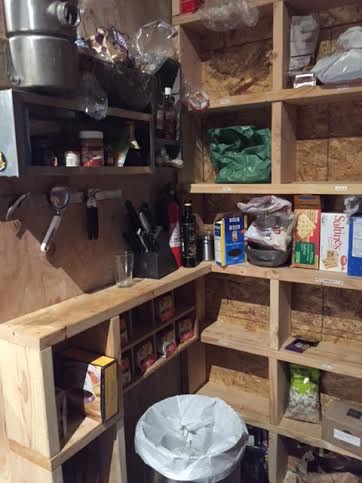 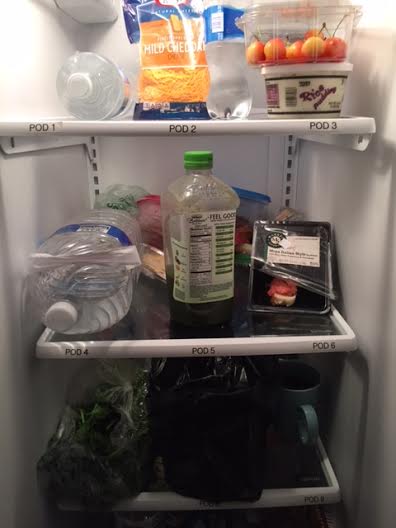 I’m immediately struck by the fact that everyone’s stuff is just laying around. This does not feel like a space where people are strangers, it’s almost as if these people have lived together for a long time. Tooth brushes are laying out on the sink, males and females use the same bathroom facilities without any hassle or controversy. There are lockers where you can lock up your valuables but no one uses them. Computers and iPads are strewn over multiple beds. Each pod is outfitted with a flat screen tv that’s hooked up to Netflix. The wi-fi is free. There are power strips and plug-ins everywhere. The casual observer might think they’d strolled into some web development outpost. Nope, just a bunch of millennials with our insatiable desire for technology. 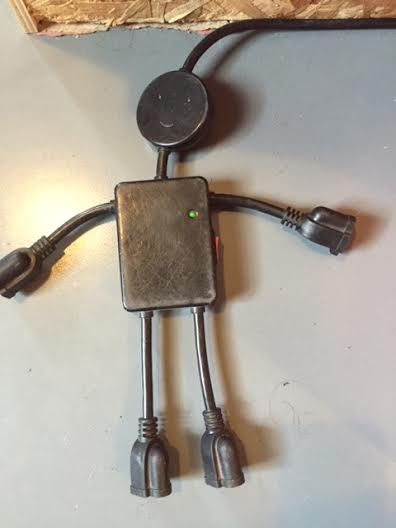 Nights at PODSHARE are exceptionally quiet. Funny enough, most of the noise comes from the outside where the lite rail cruises by every 15 minutes and people are hustling back to their cars from bars. People stay up late but they’re on computers mostly, no one is having loud conversations or being disrespectful. The only thing I didn’t think about was the fact that I’d be shuffling down stairs from my top bunk three times a night to go pee. Curse you tiny bladder. 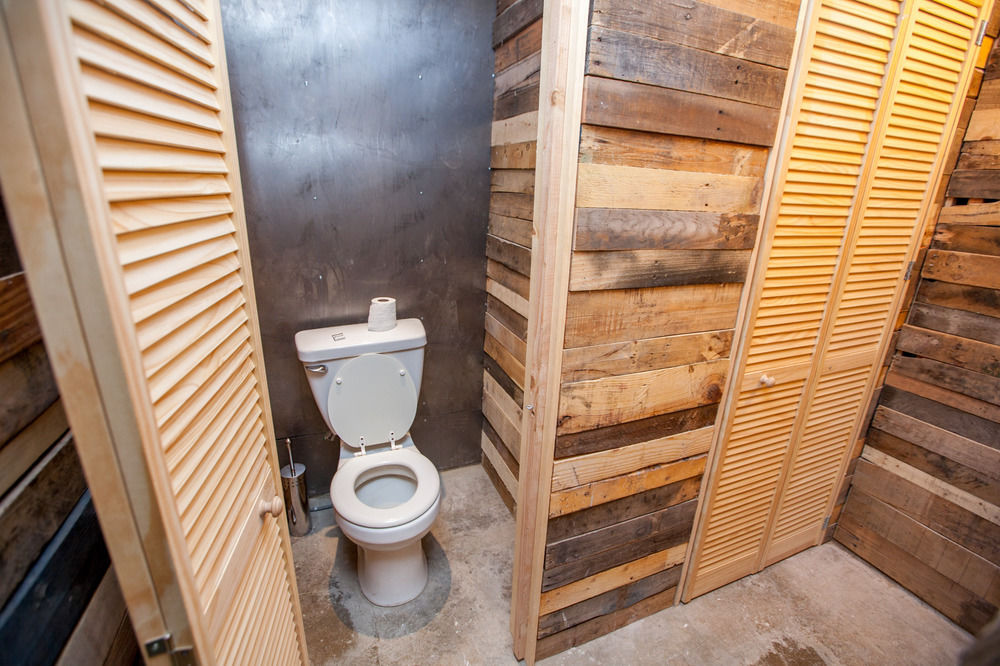 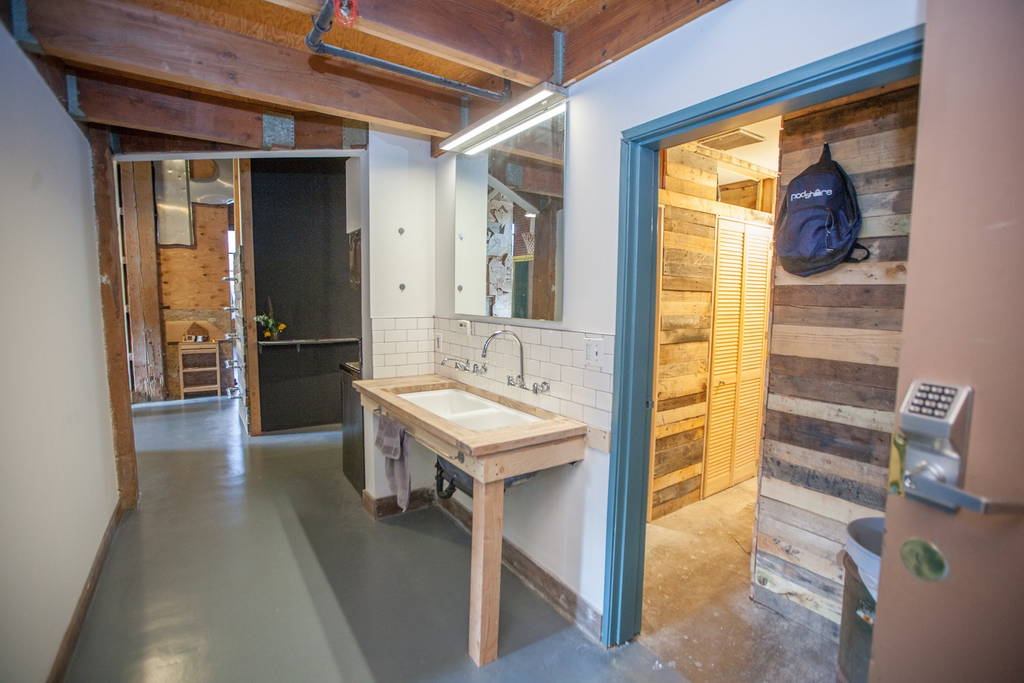 The best part about PODSHARE is the price. I always stay at Airbnb spots now typically for the cheapest price I can find, which is around $40 per night in LA for a room in someone’s home. PODSHARE costs between $40-$60 per night depending on the day you stay. But unlike an Airbnb I know I’ll have a kitchen to use at PODSHARE, I don’t necessarily have to bring toiletries or worry about having much food. I was so surprised to see a bunch of top ramen on the communal shelf. I don’t know why but I LOVE top ramen, its my thing. I could eat that stuff for every meal if I weren’t concerned about nutrition. 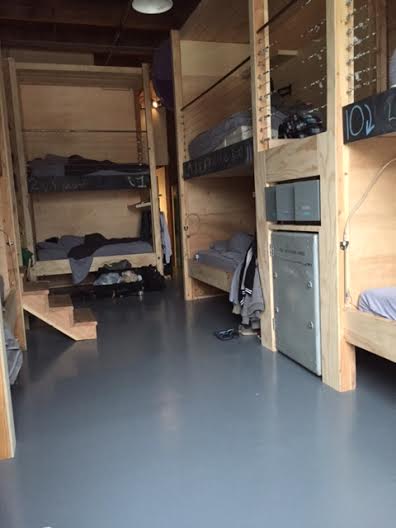 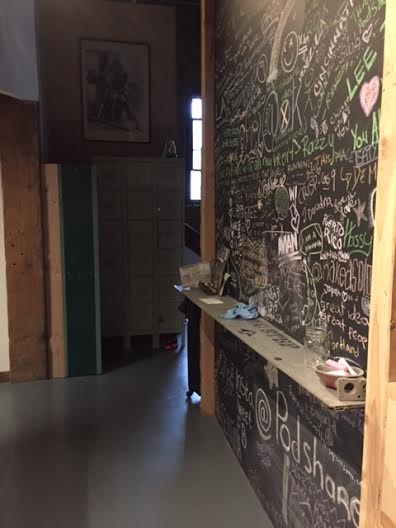 I have to say, as a single person traveling in the city there would have been no better place for me. After being at PODSHARE 10 minutes I’d met two friends and went on a walk around the city. Being at a hotel I feel isolated and lonely, afraid to go do things alone or explore. As a young woman I’m always aware of walking alone at night. Because I was at PODSHARE I had people to walk with, to take Lyft with and to have impromptu meals with. Being at PODSHARE reminds me of being back at boarding school. I have built-in conversation and built-in camaraderie. If I don’t know where the train station is or I need to borrow toothpaste, I can yell across the bunk bed and ask Sadie for help.

I think the biggest misconception about cohousing is that people aren’t considerate of others. During my entire stay no one touched my stuff while I was gone, no one ate my food or borrowed something they didn’t give back. There was no rough housing or drunken antics. My 15 room mates were incredibly respectful and kind. We all grew up with parents and siblings, we know how to respect other people’s space in a living situation. This brings me to an interesting point, if a bunch of 20 and 30-somethings can do this why can’t everyone? Why are we not doing this everywhere.

If they had PODSHARE in all the major cities in the U.S. I’d stay there every time without question. The market price for a pod in LA is around $50 so I imagine in other cities it would be even cheaper. You can stay at PODSHARE one week for $250. It’s no wonder a lot of people stay there while they look for an apartment in town. Anywhere else in LA that price would get you a cheap motel 6 room with shitty pillows and probably bed bugs. Here you have all you need plus friends and entertainment.

This brings me back to the general idea of cohousing. Obviously PODSHARE is a little different than true shared living because people are just passing through. But as far as hotel options go, I’d choose this hands down. Cohousing solves so many problems we’ve created in our current housing methods. Living spaces are getting bigger and more separated while simultaneously requiring more income to pay for. We don’t need more space, we need more functionality. We don’t need to remove all possibility of human interaction to avoid conflict, we just need to learn to live with each other. A funny thing happens when you remove the barriers to human connection: it becomes very clear that personal gain isn’t the object. Staying in cohousing this week reminded me that there is some serious joy to be had out there in the world. Gaining freedom is a process of releasing objects and replacing them with friendships. Likewise, gaining financial freedom is a process of releasing the idea that you work to gain “stuff” and replacing it with the idea that your money should work for you.

Want more PODSHARE? Check out the gallery of my trip.

* Just as a note, I was not paid to write this. I have no affiliation with PODSHARE.

Get New Posts by Email