The Money Truth Behind Apple Products 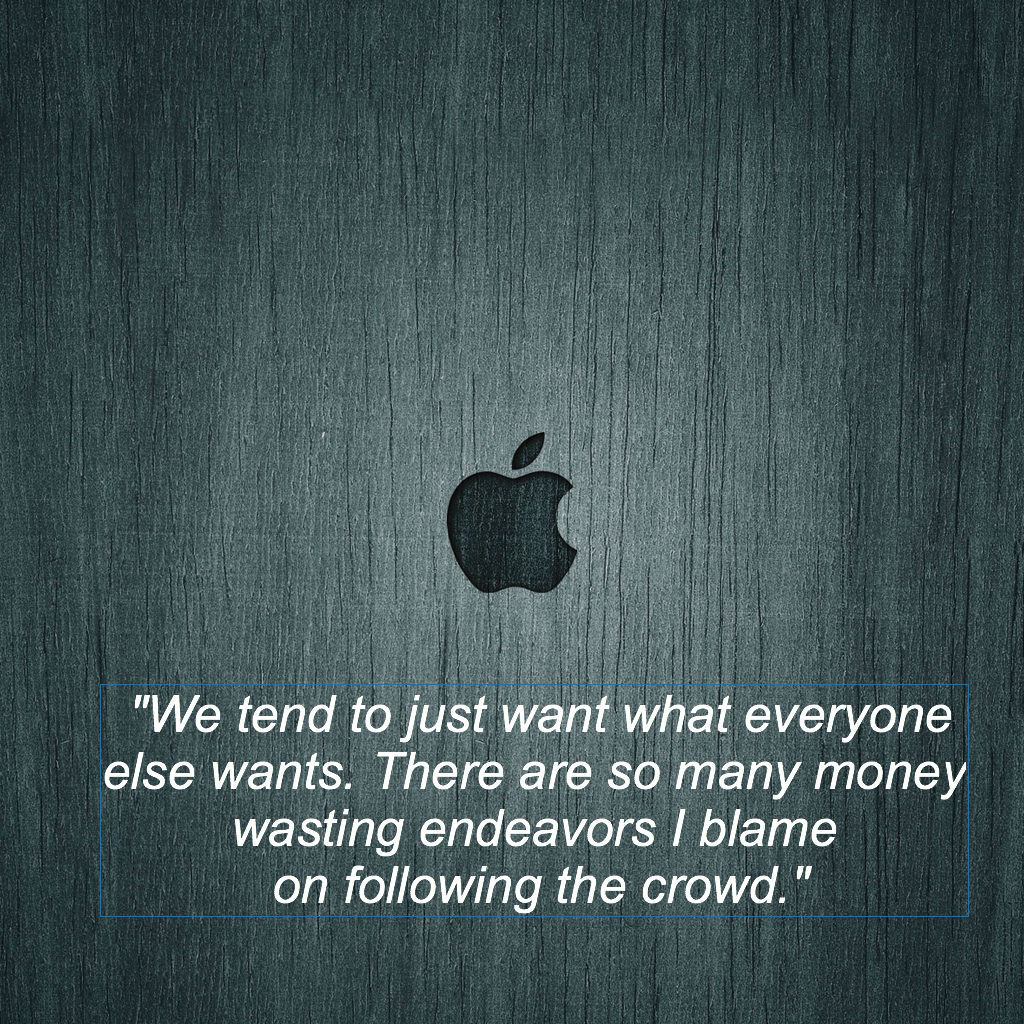 A couple weeks ago I spent the whole week camped out in my college library studying for finals. I’d leave for brief fill-ups of caffeine or the rejuvenating sustenance of top ramen. Somewhere in my frenzied studying I looked up from my laptop and noticed no one was reading a textbook and EVERYONE was on a laptop. Not only that, they were on Mac laptops. In fact, I implore you to go walk into any college library today and do a visual survey of the laptops. If 90% of them aren’t made by Apple I don’t know what remote country you’re living in. On the surface there isn’t anything deeply wrong about this. Apple has successfully marketed themselves to appeal to the young professional population. Unfortunately Apple also happens to make the most expensive computers around and we’re all drinking the kool-aid.

Let me first say that I love Apple products. Apple has been a computer staple in my household since I was a peanut. My mom had an old Macintosh that I learned to type on. I’d use it to play Spin Doctor and the sit for hours using the paint tool. In middle school I was the envy of many 6th graders with my brand new iPod. In high school I was officially an adult with my shiny white Macbook. Apple has really been there for me most of my life, as other technologies came and went. So not only do I feel some brand loyalty, I’m pretty lost trying to work a PC.

I know this is true for many 20-somethings like me. When you’ve spent years using Apple you get so used to the simplicity and streamlined feel. Apple has ingeniously made their operating system so easy to use as to corner users into needing it. That was fine in the early days when Apple was obscure and most people owned PCs. Somewhere along the line, though, Apple got popular and that had an unfortunate result: stuff got expensive.

I don’t think people realize how much more expensive Apple products are. A Dell Inspiron 7000 13″ screen with Intel® Core™ i5 processor and 8GB of RAM costs $749.00. A Macbook  with the same specifications costs $1,299. This is the same computer folks. They look different and the operating system is a little different, oh, and the store that sells the more expensive one has cool light up floors and wooden desks everywhere. It doesn’t surprise me that all over Apple’s website you see buttons for special financing. What that says to me is “our products are so ridiculously expensive you’ll have to take a loan out for them like you do your car.”

Something that’s recently started to happen is we’re being sold technology that doesn’t really give us any new functionality. This phenomenon isn’t just happening at Apple it’s pretty much happening everywhere in tech. Take the Apple watch, $400 for a tiny little screen with all the same functions as an iPhone except it tracks your heart rate for you. Thanks Apple, my $70 Fitbit didn’t already do that. Yes, but you can buy the cool Hermes watch band and all your friends will say “ooooh” and “aaaah.” Tech companies have a need to create new product categories to drive new revenue. I know some people who own a Mac desktop, a Mac laptop, an iPhone, an iPad, and an iWatch. When the new iBrain comes out you can bet they’ll go and buy it.

Another pointless endeavor has been the yearly release of the new iPhone. What’s different every year you ask? You can get your phone in a different color and sometimes the screen is shaped differently. Every year the battery lasts about four minutes longer than the previous generation and the camera gives you seven extra pixels. In this instance the power of “newest and best” really drives people to throw money away. Also we tend to just want what everyone else wants. There are so many money wasting endeavors I blame on following the crowd.

How about those storage levels for the iPhone and iPad. Typically the lowest storage level isn’t nearly enough and the highest storage is way too much. The iPhone 7 (not yet released) is rumored to offer 256 GB of storage. That’s enough storage to have 40,000 songs—enough to play continuously for two months. Or you could store 85,000 photos. If you’re a new mom that might be just enough for the first month of baby photos but for most normal people it’s complete and total overkill and we pay handsomely for it.

Apple will charge you $100 more for each storage level but it only costs them between $20-$40 to add more memory. You don’t need to have an immensely powerful hard drive in your pocket you occasionally put up against your face and talk into. You have a computer for that. If you want to do some further reading about how you’re getting screwed by segmentation I found this article enlightening.

I know how I feel about the expensiveness of Apple products as a cheapskate but I was curious what a tech guy would think, so I emailed Rene Ritchie. Rene was named one of the top 15 Apple analysts and writers by Business Insider. He also runs a website that reviews Apple products and hosts about seven tech podcasts so if there’s a guy to ask it’s probably him. He said that other companies simply offer cheaper product alternatives whereas Apple doesn’t.

“Apple products tend to last longer, which means you’re not buying as many. They also tend to have much higher resale values, so you’re not losing as much if you sell them.”

I actually agree with this, my main computer buying strategy has been to buy a Macbook two years old, use the hell out of it for two or three years, then repeat. This rule works well for more expensive products of any kind because buying used means you don’t eat the cost of “the newest and best.”

So the lesson here is Apple products are very expensive compared to your other market options but depending on what you’ll use them for it could be a good decision. I still think it’s dumb to buy the new iPhone every year when it comes out or to buy the newest shiny thing they’ve come up with. I do, however, think if you plan on keeping your computer a good five years you could easily make up what it would’ve cost you to buy two new PCs. If you buy your computer lightly used that’s even better.

Indeed, I love me some Apple products but my job as your lovable finance blogger is to protect you from the things that turn your money into ashes. Computers are a big expense that people seldom take the time to understand and so they’re going to remain a source of money-suckage. Don’t buy more than you need, buy used, and for goodness sakes don’t follow the crowd.

Get New Posts by Email

← Podshare: The Next Great LA Startup
How I Spend Almost Nothing on Groceries →