OMG I Got a Car Lease

How could I do that? Anyone who’s good with money knows car leases are a completely terrible way to spend your money! Before you go all crazy on me I have to say one thing: I need to have a new car. I’m still working out what’s the best way to get a new car, and each new car teaches me a new thing about new car buying.

Since maybe forever I’ve had car anxiety. When mom and I would drive around in the car I was always worried the car would break down. I was especially worried we would run out of gas. If the tank was more than half empty I couldn’t think about anything else. Even today, if you drive me somewhere you better have gas or I’m going to be uneasy the whole way.

I owned my Honda Fit 5 years and I don’t know if it had a gas light. The fuel never went much below half full.

Being a woman I’d say I’m generally taken advantage of by car people. It happens in the body shop, with oil and tire changes, and at the dealership. I wouldn’t be surprised if I pay 20% more on car upkeep than most. You pile that on with my car anxiety and you’ve got a situation where anyone can sell me anything that sounds like it’s going to make my car not break down. I’m just not a good used car candidate.

I’m writing this blog post to work out the new car calculations for myself. I want to know what’s the cost effective option for people who pretty much need a new car. Mind you, a new car isn’t a great situation in itself. It’s a thing that costs 50-80% of most people’s yearly income that swiftly depreciates to nothing. It actually becomes a burden the older it gets, which is a feature pretty unique to cars.

Why Would I Ever Want A Car Lease

I’ve noticed something about my generation of millennials– we don’t really want to own anything. We’ve grown up in a time of great economic instability, went through The Great Recession and have basically been thrown into a working world that requires debt (peonage) as an entrance fee. To me, owning any debt has always felt like some massive scam. I look ahead to the next big economic catastrophe where whatever thing I own on loan is suddenly worth a lot less.

I feel this way about owning almost anything big: a house, a car, an iphone. At any moment I want the option to surrender all obligations and go live in a van down by the river.

This is achieved mostly by renting things and I pay a little extra for the luxury of doing so. I would argue there is no physical asset you can own that will appreciate more than 3% per year (essentially equal to inflation) unless you own a property you can rent out greater than or equal to your mortgage payment. Leave your grievances in the comments section.

All of this is, essentially, why I wanted a car lease.

When I first considered buying a new car I thought of my last experience buying. My Honda Fit cost $18,000 new plus the $2,000 warranty the sweaty sales guy was able to jimmy into my contract. All you have to tell me is everything will be covered and nothing will go wrong. You can pretty much have all my money after that promise. I bought the car in cash with no interest payments and owned it 5 years.

The car experts say if you buy a new car you should own in at least 15 years to get the value out of it. If you don’t own a new car long enough, you are essentially eating a bunch of depreciation on the front end of the car’s life and not getting the value out on the back end of the car’s life. Depreciation is a funny thing because it’s essentially based on someone’s outward perception of how valuable a car is, merely based on years and miles and not necessarily how actually good a car is. I digress. Anyway, I’m not someone who car own an old car. I start to die of anxiety anytime a thing goes wrong so I end up selling a car after only a few years. So for me, I need to figure out how to best own a new car. 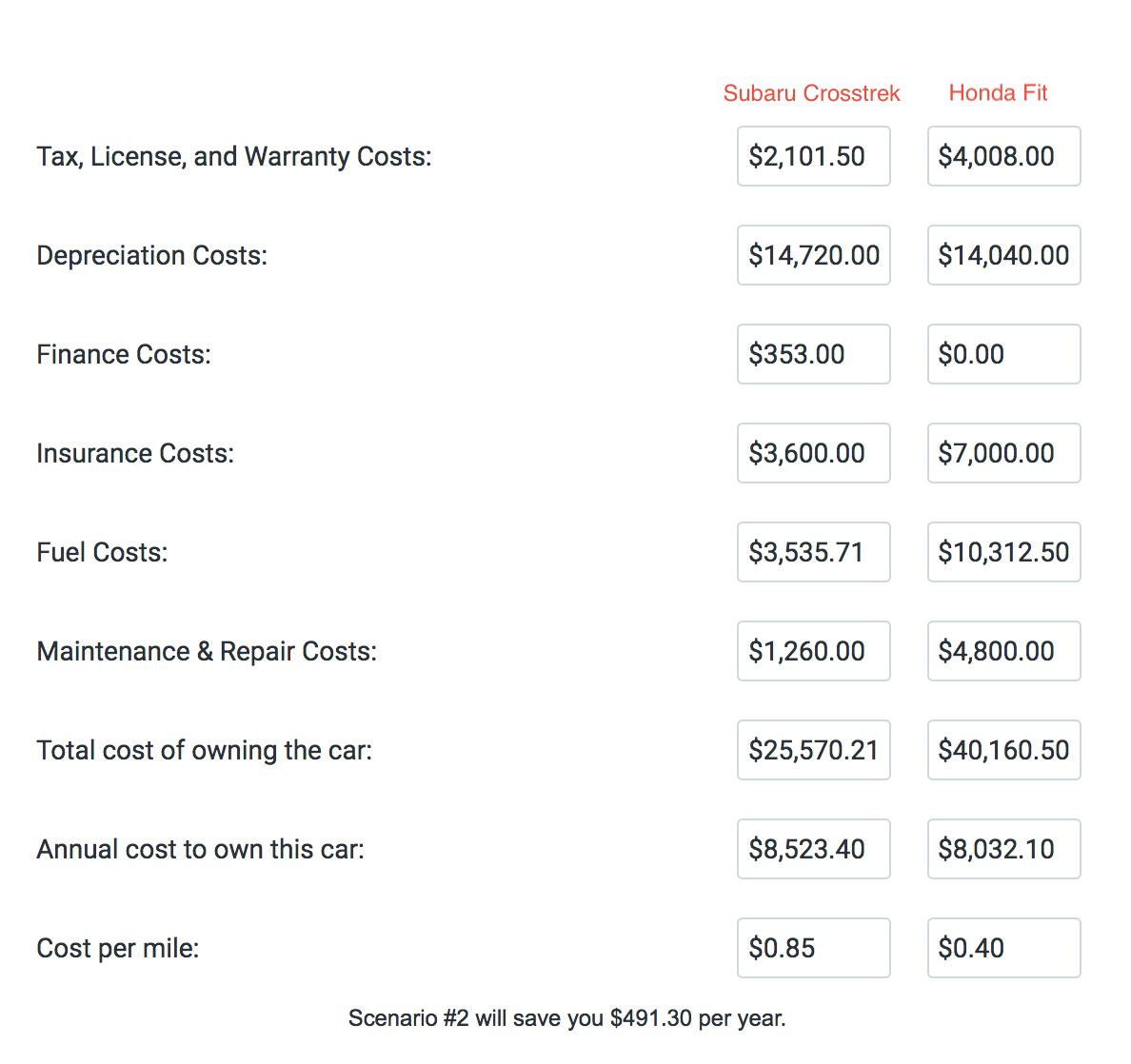 This calculator from financialmentor.com gives a good overview of car costs especially if you’re going to finance a car. It isn’t as nifty if you don’t have financing to factor in. For the Subaru above I entered the smallest amount of APR possible since the lease is calculated on monthly depreciation rather than interest.

On Tax & Warranty Costs here you can see I got murdered by that warranty I bought. Damn you sweaty car salesman.

My insurance rates on vehicles are generally very high since I’m young and also a pretty bad driver. You’ll notice there that it was actually more expensive to insure the Honda. I changed insurance companies shortly after getting the lease so my insurance went from very expensive to still really pretty expensive.

Maintenance was more on the Honda over the 5 years in which I needed several more oil changes, tire changes, and body work due to an accident.

The long and short: The Subaru lease costs more per year and will cost relatively more over the life of ownership. However, I would remind the reader that the Subaru is a more expensive car overall.

On the Honda Fit I end up spending $8,032 a year but I also get to drive the car 10,000 additional miles. That’s kind of, like, a lot more miles. While I get to surrender the Subaru lease at the end of 3 years without worrying about how to sell the car I also have to worry about mileage overage which could possibly be in excess of $1,000.

My assessment here is that the lease clearly costs more. The car company wouldn’t offer a lease if it didn’t make them money. The lease will end up costing me $11,504 but the projected depreciation of the car is $11,421 (less than that since I only drive 10,000 miles/year). 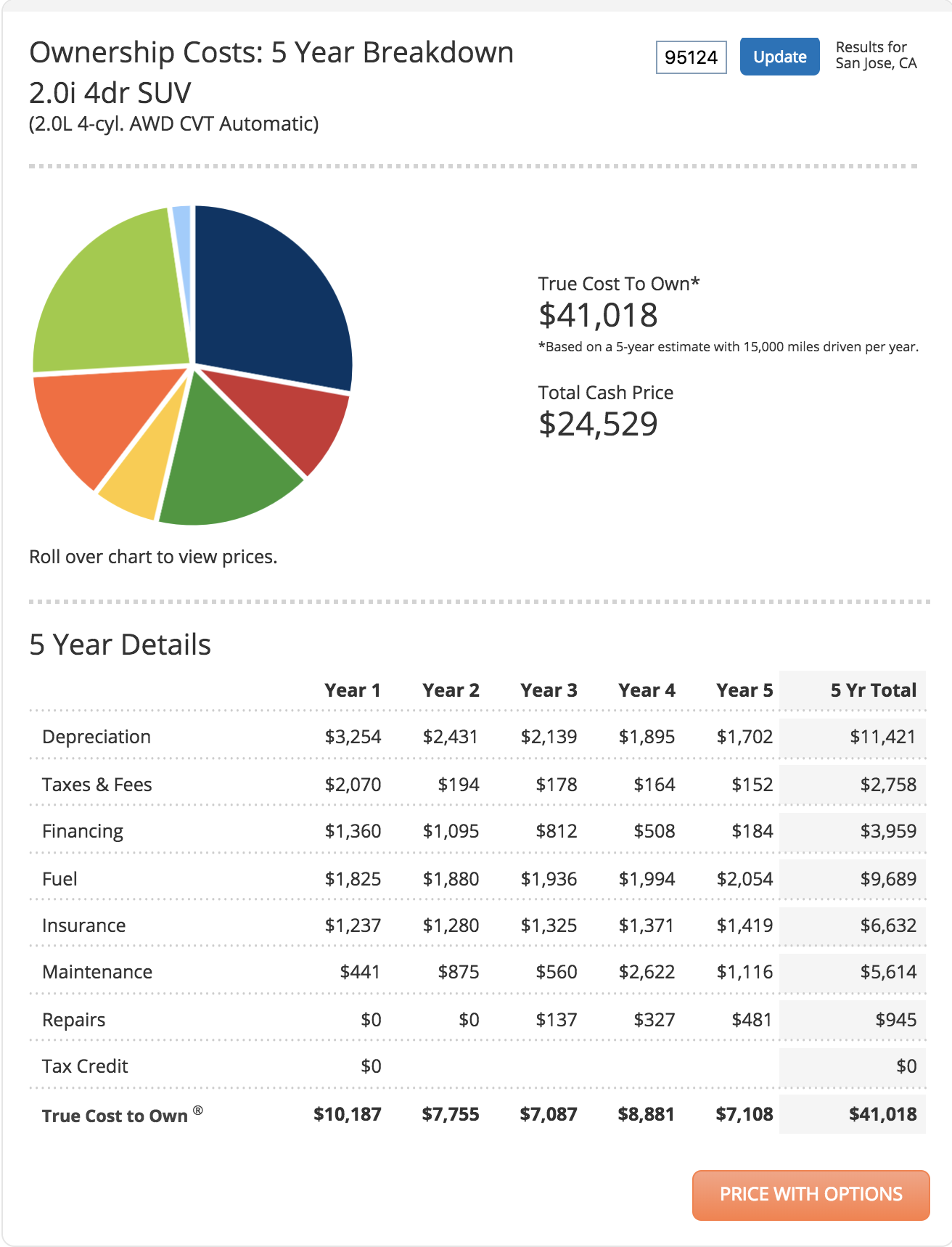 Why Car Leasing Can Be Bad

One thing that’s tricky about a car lease is that it hides the true cost of owning the car. It looks like your car payment is half of what it normally would be, and furthermore you can lease a car that’s a lot more expensive than you could normally buy. All that looks like a really sweet deal to the untrained money eye. Indeed, a lot of car leasers are the type of people who make uninformed money decisions anyway. I think that’s one reason car leases get a bad rep: they appeal to and are often bought by people who don’t really realize they are expensive.

The car lease appeals to me because I hate owning things. I feel like that bought car is a ball and chain on me each and every day, until the day I get rid of it. I don’t feel that way about the car lease somehow. Peace of mind is important to me.

Be Your Own Leasing Company

If you’re a cash buyer you can, of course, be your own leasing company. You can buy the car at full price and put money away each month equivalent to what your lease should cost ~$250-300 a month. All the while, you can drive that car as much as you want which is the feature I miss most about owning a car. At the end of three years you take a look at your car, how many miles it has and how good of condition its in, and you make a decision to sell or keep. If you sell, you’ll have a nice chunk of money saved from the car lease you paid yourself the entire time you’ve owned your cash bought car. If you keep, you should keep for a long ass time. Don’t keep a car for only 5 years like I did- with all the cost of depreciation up front and none of the long term value.

If you are not yet a cash buyer but would like to be one, you should be one starting with your next car! Hopefully if you’re reading this you are not in immediate need of a car– that is the worst state to be in when car shopping. Assuming you have a solid year or two before you will need a car, start saving money each month as if you had to pay that as a car payment. Put the money in a separate account, automated to deposit $100 a month and don’t look at the account regularly. After a year goes by you will have $1200 with which to buy a low level used car. Now, if you’re like most Americans you will feel that car is below you. Most people I come across have been trained (by marketing, the next door neighbors, the car salesman) to be on the forever car payment plan. So to become a cash buyer you should start from the bottom and work up.

The great thing about a used car is it’s already lost almost all of its value. So you can sell a $1200 car for, you guessed it, $1200! All the while, your monthly payment to your bank account continues. If you find you have enough money to contribute more per month then do so. You continually trade up each time, only paying with the cash you have and no payments. In a few years you’ll be a cash buyer and maybe even your own leasing company.

Now that all this is written I feel I may try and get a 1 year old car next time and see how the value shakes out. I’m a huge fan of buying slightly used computers for hundreds off, then selling them a few years later. I’m still checking out what’s the best cost option for little old me. Probably get it just right when I’m ready to die.

A quick commentary on transportation: the way the world has chosen to build its transportation makes very little sense. To clog up the urban landscape with roads and parking lots has made almost all cities needlessly sprawl out for miles. The price of goods bought in stores is inevitably higher because of infrastructure for parking and road space. People have less budget for more necessary items because they have to pay for a big wheel machine that costs half their yearly salary and sits idle 90% of the time. Fossil fuels and oil-made items pollute the landscape for the mere purpose of powering/encasing machines that would run just as well on renewable energy sources. People spend 37,000 hours of their life sitting in traffic that would never have existed if properly consolidated transportation existed, which can’t ever exist now because too many cars are in the way. Rant over.

It is my hope, as always, that you will take this writing and use it to empower your money life. It’s a super cool thing to pay cash for a big ticket item. It makes me feel like a big, in charge, grown ass woman. I hope you’ll get the chance one day to do it too 🙂 Please leave your comments for me